MISCONCEPTION: The Blue whale is the largest organism in existence.

TRUTH: Many would say that Ant colonies count as one organism, but they are also just too small. What we are talking about now is a super-organism, and in the world of super-organisms, ant colonies are small fry.

The largest(known)  super-organism is called Pando, Latin for ‘I spread’. Pando is a tree, or not. It varies depending on your definition of a tree. Pando (a.k.a. the Trembling Giant) is a clonal colony of a single male, Quaking Aspen(Populus Tremuloides). It is located in Utah in the United States of America.

The way it works is this; when the Quaking Aspen wants to reproduce, it both flowers and produces a clone of itself. The cloning just means extending its network of roots and forcing them up through the ground, thus starting a new tree. This new tree has the same genetic makeup and even has genetic markers to say that it actually belongs to the first tree.

The new tree grows with the old one and together they establish a large root network which produces more and more Quaking Aspen, essentially causing the single tree to expand into a clonal colony with a vast root network.

Just how vast is it?

The trees on the surface die, the root network is the real Trembling Giant, and it does not die. It constantly sends up new shoots, renews dieing trees and stops supplying nutrients to those which are dead. The reason it cannot die is because the heart of Pando lies too far beneath the ground to be reached by the frequent forest fires. These forest fires are in fact a boon for Pando as it kills off the pesky invading conifers and frees up space for many more extensions of Pando to be sent up.

Due to this invulnerability and protection from competition the heart of Pando is considered the oldest known organism in existence. Experts pin it down to being approximately 80,00 years old. This impressive longevity makes it the oldest known living organism on our fair planet. 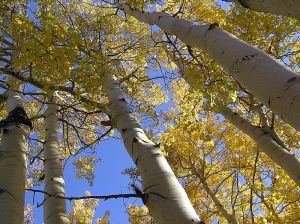 80,000 years ago the Trembling Giant was but a lone tree living in the perfect environment for it to spread, grow, flower and produce clones. However the environment has changed so much over time that it is much less hospitable towards Quaking Aspens. Experts believe that the changes in the environment have been so pronounced that  Pando has not successfully flowered in the last 10,000 years, meaning its survival is dependent upon producing more clones and hoping for forest fires to wipe out the pesky conifers.

This is impressive but there are many more super-organisms out there, many under-analysed or even unknown. So while this is good, it is almost certain that there are other things even more impressive than this.

It’s an interesting world out there.

Posted by Alexandre on March 10, 2011 in Articles, Misconceptions, Trivia